I just dug out a couple of seriously old bottles for my family this Christmas… one is a 1975, the other might be older, maybe even a ‘66. Can’t tell till I see the cork.

I’m an old guy so I like to show the young my old wines and do the usual routine; “don’t make ‘em to last like this, these days”. Except, of course, they do at Guibeau.

I don’t have a big cellar at home, I’ve always been more focussed on what’s new in our company cellar. But I do put away bottles that are special to me. These, as you can see, were down at the bottom.

Le Vieux Château Guibeau 1966 (pronounced Ghee-bo) was the second wine I ever sold and it taught me much by comparison with my first. Its maker, old Henri Bourlon, showed me that wine isn’t just about the difference between one patch of soil and another. It’s mostly about different levels of skill and dedication. Many people realise this now, but few did back then.

“Wine doesn’t get much more personal to me than the first Château I ever bought from – after first crashing and somersaulting into fierce old Monsieur Bourlon’s vineyards.”

My first two wines were made within a mile of each other on the same soils in the relatively minor appellation of Puisseguin St-Emilion but Henri Bourlon – a winemaker well ahead of his time – showed me how accepting the risk of bad weather and letting grapes hang longer on the vine produced a riper, darker and more complex wine. I loved that wine. Customers agreed and Guibeau has remained a popular wine of ours for fifty vintages now.

No other wine of ours has a sales record that comes near. 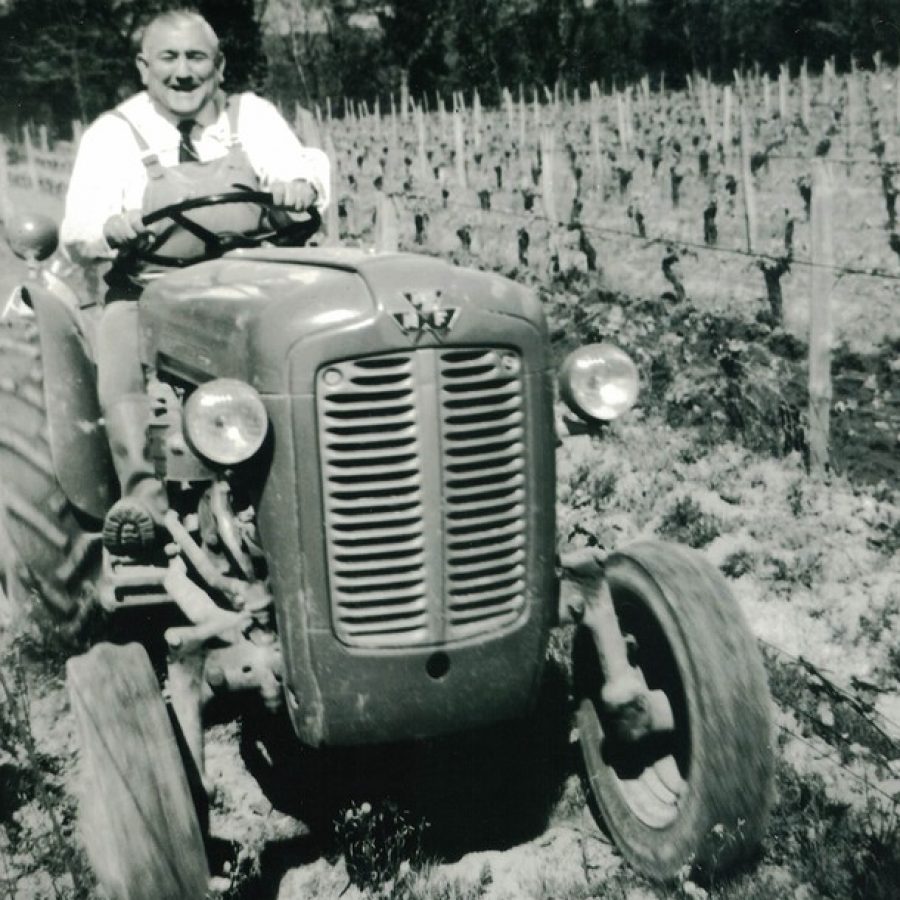 Old man Bourlon came to be a great mentor to Tony I first offered Guibeau at a whopping 18 shillings and sixpence a bottle. Today the 2016 is £14.99. Still very reasonable. We buy it from the lovely Brigitte, granddaughter of the old, original owner; Henri Bourlon. And she is a brilliant winemaker.

She likes to call me Père Anglais and I have come to know the whole family very well. Surprising really because I didn’t get off to a good start with old man Bourlon…

That summer I’d hired a Velosolex. A model they don’t make anymore, unsurprisingly maybe. It was a basic, solid bicycle with a two-stroke motor hanging from the handlebars – pull the cord to start, get on, pedal off, then lower the motor’s flywheel on to the front wheel. Voilà. It’s just not too easy to steer, and don’t even think of braking hard on that front wheel.

“After dicey beginnings, old man Bourlon became a great mentor and his granddaughter continues the family’s obsession with quality.”

Turning into Château Guibeau the machine and I messed up our cornering and somersaulted into the vines.

Extricated – dazed and half garrotted – by the family, cleaned up and revived with
good cognac, I was ushered in to meet old Henri, very stern, behind his huge desk.

When going to talk to an important wine grower it is best not to start by demolishing part of his vineyard. How odd is life, though. He became a great mentor to me and the Bourlons have been my longest serving suppliers. I could never imagine not having Le Vieux Château Guibeau on our list. One day soon I expect we’ll deal with Brigitte’s daughter, great-granddaughter of the man I first bought the wine from. I must be SO old!

Henri taught me another valuable lesson. Very generously, he would offer his guests the pick of his extensive collection of Very Grand St-Emilions to drink alongside his own much cheaper wine which always came out very well by comparison.

That’s something I have copied; my whole life since has been spent finding inexpensive, little known wines that match up to the big names.

Now you know what Tony will be drinking on Christmas Day, it’s time to get your own order in. Take a look at the festive food and wine pairings our expert wine tasters advise.

Head over to our blog homepage where you’ll find everything you need to know about choosing the perfect Christmas gift, how to make mulled wine and recipes for some delicious festive cocktails.

You can even get your hands on your own bottle of Vieux Château Guibeau 2016:

One thought on “Tony’s Diary: I’ll be drinking a sentimental Saint-Emilion on Christmas Day”